Today I visited Porky’s Blazin Bar-B-Q in Grain Valley, Missouri near Lake Lotawana.  This restaurant was quite a drive from my house and it’s kind of out in the middle of nowhere.  However, they have some good barbecue!  According to their website:

“Porky’s owner, Scott Roberts, comes from a family of pit masters and barbeque fanatics. In fact, his father Dennis Roberts opened a barbeque restaurant in 1988, named Mozarks out of Clinton, MO. Scott’s dad taught him the family pit master secrets on how to create meat so tender it melted in your mouth. He also showed him how to smoke the meat properly so that it created the thickest red ring, which produced the best wood-smoked flavor.

After working with his father for a while, Scott decided to leave the bar-be-que family business and start a construction company, which he successfully operated for 25 years. This venture taught Scott how to excel in customer service and satisfaction – a skill that he would later use to operate the #1 ranked Porky’s Blazin Bar-B-Q restaurant.

Unfortunately, in 2009 Dennis Roberts lost his battle with cancer. For years after his father passed away, Scott envisioned himself opening up a bar-be-que restaurant and carrying on his dad’s legacy. As the years went by, he became more and more passionate about this dream. In March 2016, he was able to turn his vision into a reality with the purchase of Porky’s Blazin Bar-B-Q in Grain Valley, MO. Today, he continues to  honor his family’s legacy by producing the finest mouth-watering smoked meat in the Kansas City area. “

I arrived shortly after they opened at 11:00 on Sunday.  There are a couple of things about this restaurant that you need to know before you visit.  When they run out of meat, they close for the day.  This is clearly stated on their website.  So if you want to get a certain cut of meat, make sure you get there early.  I wanted to make sure I got my brisket so I got there when they opened and I also wanted to try to make it home in time for the Chiefs game.  They also only take cash or check as payment.  No debit or credit cards.  It’s a small thing, but I’m glad I checked before I drove all the way out there because I usually don’t carry cash anymore and I never carry my checkbook with me.  So I made a quick trip to the ATM before heading that way.

This is a restaurant where you order at the counter and they bring your food out to you.  I’d guess the dining room seats about 50 people or so.  I ordered their large brisket sandwich, which was eleven dollars.  I normally order fries as a side, but they don’t have fries so I just ordered the sandwich.  I had a seat and within a couple minutes they brought my food out.

The sandwich is served with sliced brisket on a hamburger bun and is served without sauce on the sandwich.  The meat was very tender and had a very strong, great smoke flavor.  In fact, it might be the smokiest flavored meat I’ve had thus far on my quest.  Great tasting meat.  It was a bit dry, but I didn’t need sauce on the sandwich to eat the whole thing.  My daughter was with me and ordered the pulled pork sandwich and she really liked hers as well.

I pulled a couple slices of brisket off the sandwich so I could try the sauces. 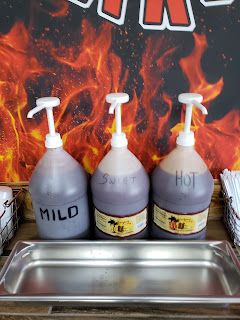 They have a self-serve sauce station and offer three kinds of sauces, a mild sauce, a sweet sauce and a hot sauce.  A follower of mine commented that sweet and hot sauce they use is called “Caribbean Cowboy” which is made by Clayt Casselman and his wife .  Caribbean Cowboy Barbeque Sauce is made with a unique blend of Latin spices, citrus juices, and brown sugar.  The mild sauce offered at Porky’s is thicker than the other two sauces and I found it to be really good.  The sweet sauce is really sweet but also really good.  The hot sauce has quite a kick to it.  It was good, but it will make your mouth tingle like it did mine!  I like it when a place offers a hot barbecue sauce that is really hot, as it should be.  Here’s a closer look at the sauces:

There is a large structure out back with three large smokers that I counted. Quite a setup. 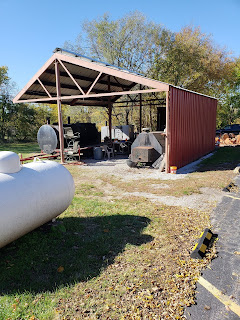 Overall our meals were great and if you like strong smoke flavor in your meat, you should definitely check this place out sometime.

This was visit number 59 on my quest.  16 more to go!  Follow along at https://www.facebook.com/joesbbqblog/.  Till next time….