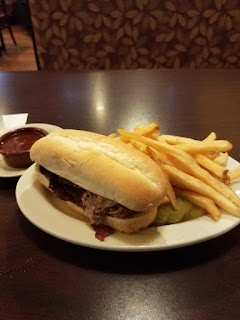 Decided to take a drive on this rainy Sunday to check out Smokehouse Bar-B-Que in Gladstone, Missouri.  Smokehouse opened in Gladstone in 1987.  They also have locations in Independence, MO and Kansas City, MO at Zona Rosa.  According to their website they have one goal…”Provide Kansas City diners with the highest quality barbecue, along with unparalleled service. Smokehouse Bar-B-Que exceeds that goal on a daily basis offering only the best hickory smoked beef and succulent chicken as well as savory seasonings, delicious sauces and rubs.”

I arrived around noon on Sunday.  This is a sit down restaurant and when I walked in the hostess seated me at a booth.  My waitress was quick to arrive at my table to take my order.  I ordered their brisket sandwich without sauce.   The menu stated that you could order the sandwich with or without sauce and I like that you can order it either way.   I asked if I could get the barbecue sauce on the side and she said that was fine.  The menu also stated that the meal comes with coleslaw and fries and as you can see in the photo above, my meal came with fries only.  I was looking forward to trying the coleslaw since they kind of brag about it on their website, but I didn’t get the opportunity.

I got my food seven minutes after placing my order.  The brisket is served on a soft hoagie bun without sesame seeds.  The brisket was hot and tender but a bit bland.  I ate half the sandwich without sauce and finished the other half with sauce.  The sandwich was much easier to eat with sauce on it.  The sauce is a pretty standard barbecue sauce.  It was pretty mild with a little sweetness to it, but not overpowering.

I finished the sandwich and started on the fries.  I quickly noticed there was a hair in my fries.  I flagged down the waitress and pointed out the hair and she let out a small gasp and grabbed my plate and walked away.  I thought her reaction was a bit odd.  She didn’t say a word.  A few minutes later she returned with a bowl full of fries, but I had already lost my appetite.  If she would have asked me if I wanted more fries I would have told her no.  She said she would give me a to-go box for the fries if I wanted it and I said that was fine.  She brought my bill without saying another word.  I looked at the bill and she did deduct $2.39 for the fries but she still charged me for the sandwich.  With the discount my bill was $10.30.  I am still a bit stunned that the waitress never said “I’m sorry” or offer any kind of an apology.  I actually got more of a “this kind of thing happens all the time here” vibe from her.  Not a good look, regardless.

Overall I was pretty disappointed in this visit.  The sandwich was just okay and getting a hair in your fries is never a good thing.  I’ve told people I’ve been pretty lucky so far in that I haven’t had a bad visit to any of the restaurants I’ve tried.  I’d have to count this as my first bad visit.  It was bound to happen eventually and it’ll probably happen again.  It was even more disappointing that I went out of my way to try this place and they tout their “highest quality barbecue” and “unparalleled service” on their website.

This is visit number 14, which is twenty percent of the list.  Just a small milestone on my way to visiting all 70.  Till next time….