November 13, 2017 by Joe Mathieu
Today I visited The Big Q Barbecue in Kansas City, Kansas near 34th and Steele Rd.  According to their website, “The Big Q Barbecue is a long line of traditional Quick’s family Barbecue, which started in 1953.  In 1986 Rusty Quick, Marvin’s son, and Gary Wright, Marvin’s son-in-law, started the Big Q Barbecue in Maple Hill.
Rusty started working at the 7th St Barbecue when he was 10 years old busing tables doing dishes and learning the business from the ground up, working evenings and weekends through the school year. In 1979 Gary started working in the family business and learning the trade so that by 1986 both Rusty and Gary broke away and started The Big Q Barbecue.”
I arrived around 4:00 on Monday for a late lunch/early dinner.  I was the only one in the restaurant at the time I arrived.   This is a sit down restaurant where you choose where you want to sit and a waitress serves you.  My waitress was quick to greet me and give me a menu and take my drink order.  In looking at the menu, I noticed their beef brisket sandwich does not come with a side dish, so I ordered their brisket sandwich with a side of their spicy fries.  I received my order about five minutes after placing the order.
The sandwich is served with barbecue sauce on it on a large bun.  When I took the first bite I noticed the meat was a bit bland and chewy and almost a little stale tasting like it had been sitting out a while.  I will say, however, that they do a good job of trimming the fat on the meat.  There were no pieces of fat in the sandwich.  They also give you a pretty large serving of meat.  The brisket is cut into thin slices and they do not douse the sandwich with sauce, so you can really taste the meat.  The meat was a bit dry but the sauce helped with that.  Overall I was kind of disappointed with the taste of the sandwich, but the serving size and lack of fat helped make up for it.
They have two barbecue sauces to choose from.  A regular sauce and a spicy sauce.  The regular sauce was a bit bland and kind of tasted like ketchup with some spices in it.  The spicy sauce was pretty mild as well and only had a slight kick to it.  I’d recommend the spicy sauce if you are going to eat the barbecue here.
The spicy fries were served waffle style and weren’t overly spicy.  I ate them with the spicy sauce and the sauce complemented the fries pretty well.
This is the second time I have visited this restaurant, but the first time since starting my quest.  They’ve been going strong since 1986, just over 30 years now. 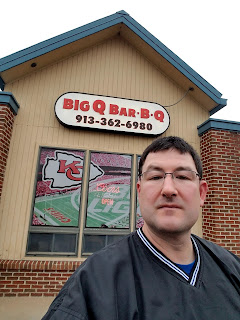 This is stop number 28 on my quest.  One more stop and I will have visited 40% of the barbecue places in the city.  Still a ways to go!  Please follow along on my Facebook page as well and share with your friends that might be interested.  Thanks!  Till next time…