Today I visited McGonigle’s barbecue lunch trailer located right outside their store at the corner of 79th street and Ward Parkway in Kansas City, Missouri.  McGonigle’s meat market has been around since 1951.  I’m not sure when they started cooking barbecue outside the store, but I’m glad I found out about it.  They’re open most days from 10:30 AM to 5:30 PM.  The exceptions are Monday, when they’re open 10:30 to 3:30, and Sunday, when they’re open from noon to 5:00. They are open from spring time until fall, but don’t have specific dates for then they open and shut down for the year.  If you’re worried whether they’re open or not, it would be a good idea to call and ask to make sure before you head that way.

I arrived around 12:55 on Friday.  To order your food you have to go inside and order at the register.  They give you a ticket that you give to the guys running the trailer.  There is a huge running smoker right next to the trailer, so you know the food is fresh off the smoker.  The cost for a brisket sandwich and fries was around $10.50.  I stood in line at the trailer for about five minutes.  Once I gave them my ticket I received my sandwich very quickly.  They asked what kind of sauce I wanted and I asked for it on the side, which was not a problem for them.  I received the sandwich in a Styrofoam container and had to wait another minute or so for my fries. 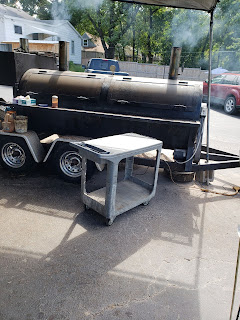 The only seating option was outside at the picnic tables.  There are about 10 tables in a grassy area next to the store.  If the weather is bad, you’ll have to take your food to go.  Otherwise you can sit at one of the tables, which is what I did.  The brisket is served on a round hamburger bun and is served chopped.  They gave me a large serving of meat that was way too much for the bun to hold.  The brisket was tender and flavorful with a crunchy bark to it, but it was very greasy.  Because it was chopped and greasy it made for a messy sandwich, so make sure if you try it that you have napkins or paper towels nearby.  It was a good sandwich, just messy.  And I prefer sliced brisket over chopped.  No complaints other than that.

I tried their sauce with my fries.  The fries were waffle fries and they had a tasty seasoning on them.  They were served in a paper bag, which was an odd touch.  The sauce was molasses based and very syrupy and sweet.  If you like a sweet sauce you might like it.  It was just way too sweet for my taste. 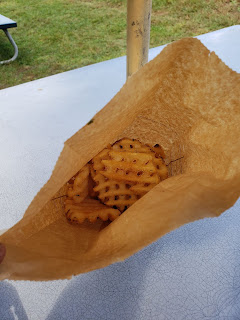