Last night I visited Luther’s BBQ on 129th and State Line in Kansas City, Missouri.  Luther’s opened on July 20th of this year and was formerly known as Murray’s Tables and Taps.  Owner Pat Murray has partnered with Luther Saulsberry to help change Murray’s into a barbecue restaurant.  I found a little bit of the background and history of this decision in an article from the Martin City Telegraph:

“The former Irish/American restaurant is now Luther’s BBQ, complete with a newly installed Ole Hickory wood smoker in the kitchen and a more rustic, industrial look in the dining area.

Owner Pat Murray shared some of the background on the transformation. He owned a barbecue restaurant for 13 years (1997 to 2010) with locations in Lawrence and Manhattan, Kan., and at the Hy-Vee at 123rd and State Line Road. It was called Pat’s Blue Rib’n Barbeque, Murray says, noting the play on words in the name.

Murray worked with award-winning pitmaster Luther Saulsberry  as a consultant for the Manhattan store back then. Saulsberry, who worked for 24 years at Quigley’s in Leawood, had recently become available. After tossing around the idea of reopening a barbecue restaurant, the two formed a partnership.

Now you’ll find Saulsberry in the kitchen serving up racks of ribs, burnt ends and smoked meats with just a drizzle of barbecue sauce.

Luther’s BBQ serves a full barbecue menu along with homemade side dishes. The specialty is burnt ends, but Murray is keeping some of the same items from his former menu such as salads, burgers and sandwiches. His daughter Katie Murray Dubin remains as the general manager.

As for the established bar business? In all likelihood Murray will bring back live music once he settles in. He definitely wants to keep his previous customers, stating, “This is my background and I really look forward to pursuing this now that I have the right person to do it with.’”

I went to check this place out with a small group of friends since one of them is friends with both owners and has worked with Luther in the past.  We arrived around 5:15 Saturday night.  This is a sit down restaurant where a hostess seats you and you are waited on.  We decided to order some appetizers and ordered the fried pickles and smoked wings.  Both were good.  The wings had a great smoky flavor.

Luther came out to say hello and we had a short conversation and he recommended the burnt ends.  I already knew what I was going to order, but one of my friends ordered the burnt ends and the other ordered a full slab of ribs.  I ordered a brisket sandwich on a bun with no sauce on it.  You can order it with bread or a bun.

We received our food about 15 minutes after ordering.  The brisket was thinly sliced on a toasted bun.  It was tender and juicy with a nice smoke ring, but it was a bit fatty.  They give you a large portion of meat on the sandwich, which is a great serving for the ten dollar price tag.  The sandwich and the meat reminded me of what you would get at Arthur Bryant’s.  If you’ve had Bryant’s brisket, it is similar to what you get at Luther’s.

We received a sampling of the barbecue sauces that they offer and I decided to try them with my fries..  The standard sauce was a good, thick and mild barbecue sauce.  The spicy sauce had a bit of a kick to it.  Just enough to get the mouth to tingle a little bit.  Both sauces were really good.

The meal was great overall and I’d encourage you to check it out sometime.  I tried the ribs and they were really good as well.  Very tender and stuck to the bone.  Prepared almost perfectly.

I’m glad I have a lot of friends interested in my quest that have decided to join me on some of my stops.  It’s always good to get their perspective and feedback on the food we’re eating and it’s nice to have some company as I’m going through this! 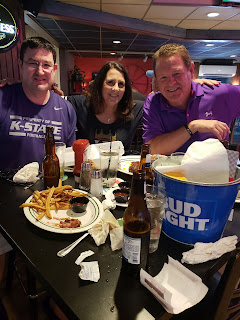 This was stop number 56!  18 more to go!  Thanks again for reading and following along.  I enjoy reading your comments as well.  Keep them coming.  Till next time…