My final stop on the barbecue quest took me to Odessa, Missouri and Vig’s KC Bar-B-Q.  Odessa was a bit too far out off town to initially make the list of Kansas City barbecue restaurants, but I had a couple followers and readers insist that I add it to my list so I did.  I’m very glad I did.

Vig’s is run by Gerald “Vig” Vigliaturo.  Upon retirement from Black and Veatch, Vig’s daughter got him some business cards and a business license for his birthday to start a catering business.  The catering business evolved into a food truck and eventually grew into a restaurant location in downtown Odessa.

I arrived a little bit before 5:00 on Saturday.  I ordered a brisket sandwich combo, which comes with two sides and a drink for around 12 dollars.  The menu says “Piled high.  You should be full.”  That’s no joke.  As you can see in the photo above, the sandwich is humongous!

There was a family of four in the restaurant when I arrived and I was the only other person in there at this time.  Vig came out and greeted me and asked me where I was from.  When I told him Olathe, he asked what I was doing there!  I told him about my quest and he thought it was really neat that I am doing it.  He asked me to sign his “out of towners” guestbook that he has on the counter and I was happy to do that.

I ordered the baked beans and coleslaw as my side dishes and both were good.  The brisket was served thinly sliced on a bun and was a huge portion of meat.  The meat was very tender with a good hickory smoke flavor and smoke ring, but it was a bit cool temperature-wise for my taste.  There were three sauces that he offered, a spicy sauce, a mild sauce and a hot sauce. 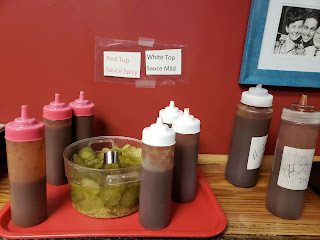 The spicy sauce was sweet and spicy.  The mild sauce was good and the hot sauce was definitely hot, but very good as well.

When the family of four left, Vig came out and asked me if the music he was playing was ok, which was oldies music.  I told him that was fine, so he cranked up the radio a bit.  It was pretty funny.  Since there was nobody else in the place, he had a seat at my table and we talked a lot about his history, barbecue and business in general.  He was telling me about the menu and every time he mentioned something he asked if I liked it and when I said yes, he would say “ok, you have to try it” and he’d go back and get me a sample.  I sampled a lot of the menu while I was there.  He also makes sausages, soups and chili.  It was all great.  He brought out samples of the pulled pork and burnt ends.  The pulled pork was good, but the burnt ends were fantastic.  I commented how great they were and he nonchalantly said “Yeah, they’re awesome, aren’t they?”

Vig is very proud of his food.  He gave me some of his chili and soup to take home and both were great.  I also got a free t-shirt out of the deal!  I promised him I’d wear it to give him some advertising.

Vig is a great guy who loves what he does and he loves great barbecue.  It was a pleasure talking to him and visiting his place.  The restaurant is only a block or two off of I-70 at the Odessa exit, so if you’re traveling down I-70 it would be worth your time to stop in and try it.  He is open Wednesday through Sunday from 11-9.  He offers a sampler platter that includes samples of everything on the menu and it’s around $35.  It’s over four pounds of meat in total, so it’ll feed a few people.  Definitely check it out!

This stop completes the quest!  So what comes next?  I’m going to visit the top three or four places on my list to get a fresh perspective and then I’m going to announce my top 20 list!  We will have events at the top three restaurants where everyone can go and enjoy their barbecue.  It will be a great time!

Thanks for reading and following along.  This has been a blast!