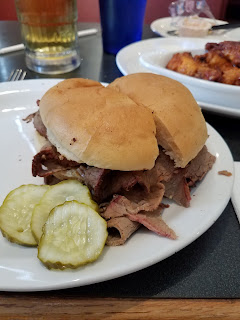 Tonight I went to Brobeck’s BBQ in Overland Park off of 107th and Roe.  Brobeck’s BBQ is owned by the original owner of Stillwell Smokehouse. They’ve been open in their current location since November, 2007.  You can check out their website at http://www.brobecksbbq.com.

This is a sit down restaurant.  I walked in and was greeted instantly by a waitress who said I could sit wherever I wanted.  Once I found a table, she quickly came over and gave me a menu.  I noticed that they have smoked chicken wings, so I decided to try those along with the 1/2 pound brisket sandwich.  The waitress offered me a free smoked ham salad appetizer with crackers.  It was pretty good.  There is a picture below. 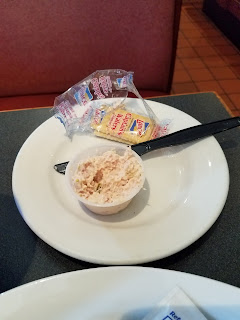 I had my food within five minutes.  They serve the sandwich dry, which is great.  There are two kinds of sauces at the tables, but they also have a sauce bar with about five additional kinds of sauces you can choose from.  I tried the sandwich without sauce first and found it a bit dry, although the meat had a decent flavor to it.  I tried their main sauce first and it was very good on the sandwich.  I also tried the mustard sauce, which was interesting.  It had a good flavor and was actually pretty good on the meat.  Neither sauce had much of a bite to it.  The sandwich was served warm, not hot.  I found that a bit odd.  By the time I was done with it the temperature of the meat was kind of cold.  It didn’t really bother me much though.

I tried the wings and the meat had a great smokey flavor to them.  However, the skin was a bit fatty and they use a standard buffalo wing sauce.  I was a big fan of the smokey meat flavor but not a fan of the skin and the sauce.  Not sure if I’ll try them again. 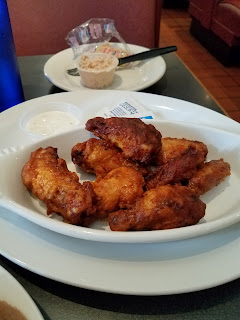 There was an older couple sitting next to me and the husband spent the entire time I was there explaining to his wife how the NBA draft lottery works.  She just nodded the entire time like she was interested in what he was saying when she obviously wasn’t.  He broke down every KU lottery pick for the last 20 years or so for her.  More information than she wanted, for sure.  I was interested in what was going on over there because she ordered the ribs and the rib plate was huge.  I think she ate two or three of the ribs and was going to take the rest home for leftovers for the next week!  The ribs looked excellent so I want to go back and try them sometime.

I’d recommend this place if you’re close by, but I’m not sure I’d go out of my way to make a special trip there.  Maybe the ribs will change my mind!

That’s four places down now.  A couple people mentioned that I should try the Johnny’s in Olathe off of old 56 highway.  I was planning on trying the Johnny’s off of Johnson Drive and I think they’re connected.  However, I don’t mind adding another place to the list so I think I’ll check it out next.