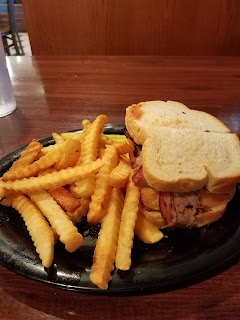 Tonight I visited Johnny’s BBQ in Olathe, KS.  I had planned my official review of their barbecue by visiting the Johnny’s in Mission, but a couple people noticed that I said I was completed with Olathe BBQ and mentioned that I hadn’t been to Johnny’s yet.  I don’t mind adding the second location to my list even though it’s owned by the same people, so I thought I’d check it out.

Johnny’s website is http://johnnysbbqkc.com/ if you want to check it out.

I’ve had the brisket at Johnny’s before, but it’s been a while.  At Johnny’s you sit wherever you want and you are served by a waitress.  If you want to take your order to go you can order at the counter.  I ordered the sandwich and 1/2 and fries.  It took about five minutes to get my order.  The sandwich is served with their sauce on it, but they don’t put a lot on it.  The sauce is pretty sweet and has a bit of a bite to it.  The meat was very tender and flavorful.  It is served on bread slices instead of a bun.  This is the first place I’ve been to on my quest that’s served the sandwich that way.  All of the others have served the meat on a bun.  It was a very good sandwich and probably the best I’ve had so far.  I had a hunch that would be the case since Johnny’s  is a very popular place and well known to have good barbecue.

I wasn’t a fan of the fries.  As you might be able to tell in the picture above, they are crispy and were a bit overdone for my taste.

My total bill for a sandwich and fries was $9.84.  I think it’s a good bargain considering how big the sandwich is.

For the second time in a row the older couple sitting at the table next to me ordered ribs and the ribs looked very good.  I’ll have to try them when I go back.

Best barbecue so far after five stops?  The title would have to go to Johnny’s.