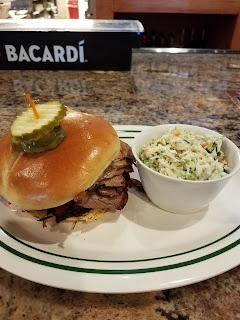 After 50 years in the food business, Gary Berbiglia decided to come out of retirement and open a restaurant that I would describe as a cross between Stroud’s and Jack Stack. Gary was co-owner of two legendary restaurants in the Kansas City area, Joe’s Barn Restaurant and Arthur Bryant’s Barbecue. Begbiglia’s opened a little over a year ago.  Their website is https://www.berbigliasroost.com if you want to check it out.

Berbiglia’s is on the east side of Metcalf near 87th.  I visited around 5:00 on a Tuesday.  It was a bit awkward because there were no customers in the place and as I pulled up I was wondering if they were open because the parking lot was empty.  They had a neon “Open” sign in the window so I figured they must be open and I went inside.

This is a sit down restaurant where the host seats you and you order off the menu.  I decided to sit at the bar and since they were so slow I was served by three different people.  They were obviously trying to impress their only customer at the time.  The entire time I was there, only one party of three came in to eat.  Makes me wonder how this place is making it.

I ordered the brisket sandwich with coleslaw.   By the time they brought my dinner roll my sandwich was being served.  It took less than two minutes to get my food.  The sandwich is served with no sauce on it, so extra points for that!  They have two different kinds of sauces and the bartender recommended I mix both of them and put them on the sandwich.  The first kind is their Heat N Hot sauce and the other is the Roost Original.  Before I tried the sauce I had to try the sandwich dry.  The meat was flavorful with a crispy bark.  The meat was a bit dry after a few bites, but I could have finished the sandwich without sauce so it wasn’t TOO dry.  I put sauce on half the sandwich and tried both at the same time as recommended.  It was pretty good.  The Heat N Hot sauce on its own was of course a bit spicy but was pretty good.  I am a big fan of the original sauce.  It has only a slight kick to it but was not sweet at all.  I’m not a big fan of sweet sauces, so that’s why I liked this one.

The sandwich with a side is $11.95.  A bit more pricey than what I’ve gotten at other places, but only by a couple dollars.  I’m going to go back sometime to try the fried chicken, since that is really their signature dish.  All in all it was another successful visit and I’d recommend it.