The BBQ Shack in Paola, KS 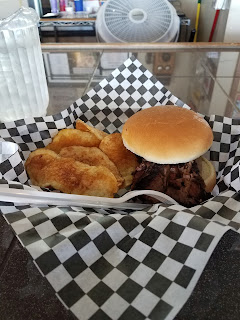 Today I drove south to Paola, KS to check out The BBQ Shack.  They were featured on Guy Fieri’s Diners, Drive-Ins and Dives television show in 2007.  They made “the list” of Kansas City barbecue places when I did my initial research so I decided to make sure they were on my list of places to visit.  Their website is https://www.thebbqshack.com if you want to check it out.

This is a restaurant where you seat yourself and a waiter or waitress waits on you.  I decided to sit at the bar.  I was greeted by a very nice female bartender and given a menu.  She asked what I wanted to drink and I asked for water.  She came out with a small pitcher of water and a straw and no glass or cup.  Then she walked away.  I was a little perplexed at first but then I looked around and saw that they serve all of their drinks in small pitchers.  Other patrons had their straws stuck in their pitchers drinking directly from it.

I noticed that they serve two kinds of barbecue sauce, a Sweet Fire sauce and their Original sauce.  I ordered a brisket sandwich with no side and they had my order ready within a couple of minutes.  The sandwich is served on a bun with no sauce on it, so I give them positive points for that.  However, the brisket was a bit chewy and bland.  I wouldn’t say it was dry, but I wouldn’t say it was real juicy either.  I took a few bites and then decided to try it with the sauce.  The sandwich went down a lot better with sauce.  The Original sauce was good; not sweet or spicy.  The Sweet Fire sauce was exactly what it says.  Sweet and spicy hot!

The bill for the sandwich and chips was $8.84.  I visited around noon on a Saturday and the place was pretty packed and still had very fast service.  This might be the only barbecue place in Paola, so if you’re in the area I’d recommend it.  It’s right off of 169 highway near Miola lake.

This is the 9th restaurant on my journey.  I’ve got a ways to go before I hit them all, but I think I’m going at the right pace.  Till next time….