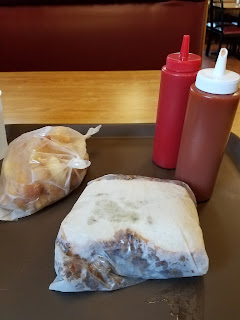 I’m so happy I found Wyandot BBQ in Kansas City, KS.  I had never eaten there before but had heard of it.  First of all, I’m not sure why it’s spelled Wyandot and not Wyandotte.  The only thing I can figure is that it’s named after the Wyandot Indians.  Either that or the owner’s last name is Wyandot.  I found it strange that it’s located in Wyandotte county and spelled that way.  Anyone know?

Their smoker outside was going when I pulled up around 1:30 on a Friday.  The restaurant is on the north side of State Ave.at 84th street near Schlitterbahn.  I drove by it the first time without realizing it was there.  After I pulled a U-Turn I saw it.  If you look up the definition of “shack” in the dictionary, you might see a picture of this place.  I had a feeling I was in for a treat and I was right!

At Wyandot BBQ, you order and pay at the counter and seat yourself.  They do have a counter you can sit at as well as tables. I got my food really quickly. Both the sandwich and fries come wrapped as you can see in the photo above. The sandwich is served on bread with sauce on it. The beef is shredded, not sliced.  This is the first place I’ve visited that serves their brisket sandwich shredded or pulled. 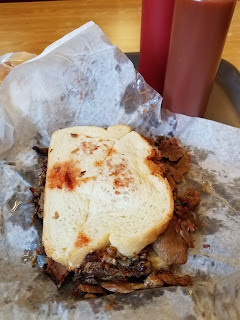 The meat was very tender, hot and flavorful. Since the beef was shredded, it makes for a messy sandwich.  It was so good that I didn’t mind at all.  The meat was so juicy that the bread became soggy. The sauce has a small bite to it but it’s not overwhelming.

The fries were hot but they had no seasoning on them. I ate them with barbecue sauce.  They provided ketchup and barbecue sauce on your serving tray. 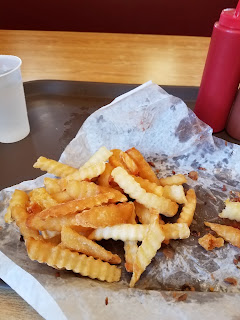 They were not busy during this time of day, but there were a few customers and a few more that came in and ordered to go. They have a drink station but no barbecue station.  They only provide one kind of sauce with your order.

This is a great hole-in-the-wall barbecue place.  Next time I’ll order the sandwich on a bun instead of on bread because the bread got too soggy, making the sandwich fall apart.  After I ordered I realized that you have a choice of bread or bun even though she didn’t offer me a choice when I ordered.

Definitely try this place if you haven’t tried it before!