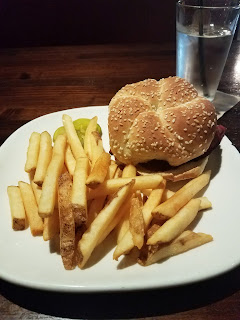 Decided to make a stop at Jack Stack in Martin City tonight around 5:00.  There are a lot of good food options at Jack Stack, but I was there to try the brisket sandwich.  Jack Stack is known as one of the “high end” barbecue places in town.  I arrived at the right time and was seated right away.  My waitress showed up instantly and I was never left alone long.  I had three different waitresses come check on me in the time I was there.  They all help each other out.

I ordered the brisket sandwich on a sesame seed bun.  There is an option to order it on a hoagie bun, but I went with the sesame.  It comes with two sides and I ordered coleslaw and fries.  My waitress brought out the coleslaw before the sandwich which was a bit odd, but ok.  The sandwich and fries arrived a few minutes later.

The sandwich is served with sauce on it.  My waitress asked if I wanted more sauce and I declined.  The meat was served very hot and was tender and flavorful.  The meat was very juicy.  I noticed they don’t really trim the fat on the slices of brisket, or if they do they leave a lot of the fat on the meat.  This must help keep the meat juicy.  I finished the sandwich and didn’t need any additional sauce.  There wasn’t much sauce on the sandwich and to tell you the truth I didn’t really taste it much.

They have a fry seasoning in a shaker on the table and I used that on my fries.  It was pretty good and made the fries very tasty.

My waitress asked if I wanted carrot cake and although I’m not a big dessert guy I do love carrot cake, so I decided to try it.  She delivered it a couple minutes later.  It might very well have been the best carrot cake I’ve ever had.  It was excellent!  I didn’t finish it and brought some of it home to eat tomorrow!

A lot of people rave about Jack Stack, and for good reason, however I’ve had as good or better brisket at a couple of the other places I visited so far and I’ve still got a lot more to go.

This has been a lot of fun so far.  I’ve got 10 down, so at least I finally hit double digits!