Took a trip to St. Louis this weekend and decided to try one of the best barbecue places in town, Sugarfire Smoke House BBQ.  There are multiple locations in town, but the St. Charles location was closest to us so we went there.

The building looked like an old drive-in restaurant like an A&W or like a Sonic today.  They even let you pull up and order from your car and they come out and serve you. 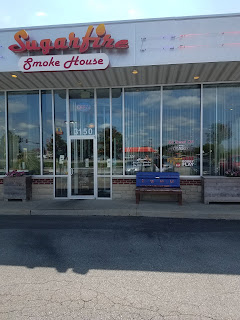 There are two large smokers outside behind the restaurant that were both full of cooking meat.  When we walked inside, there were two pork butts that had just come off the smoker.  They looked great, but I was here to try the brisket.

The sandwich is served without sauce.  The brisket was very tender and flavorful with a crisp bark on the meat that was very tasty.  They had five different types of sauces on each table but this sandwich was so good that there was no way I was going to ruin it by putting sauce on it.  I finished the entire sandwich without sauce because I didn’t need it.  I LOVE that.

I did take a couple strips of brisket off the sandwich so I could try all of the sauces.

The first sauce was just labeled “#47.”  It was really good and was a pretty mild and standard barbecue sauce.  No bite to it at all.  The second sauce I tried was the “St. Louie Sweet” sauce.  It was way too sweet for me, but if you like sweet sauce you’d like this one.  The third sauce was the “Coffee BBQ” sauce.  It’s a little like the #47 sauce, but has a coffee flavor to it.  Very unique and very good.  This is the first barbecue place I’ve seen that has a coffee sauce!  The fourth sauce is the “Dragon’s Breath” sauce.  Because of the name I was expecting it to be really spicy, but it really wasn’t.  It did have a slight kick to it, but it was not overpowering.  The taste did linger on your tongue for a while after tasting it, however.  The fifth and final sauce was the “Honey Badger” sauce.  It’s a bit sweeter than the #47 sauce and not quite as sweet as the St. Louie sweet sauce.  Really good option if you like a little sweetness in your sauce, but not too much sweet.

The coleslaw was just a standard coleslaw you’d get anywhere and nothing special.  We did try an order of ribs while we were there.  The rub on the ribs was very good and the ribs were chewy and stuck to the bone, so they’re not the fall off the bone type of ribs by any means.

My buddy Frank was with me and he tried the pulled pork sandwich and said it might be the best pulled pork he’s ever had!

The brisket sandwich would be a top contender as the best sandwich of the eleven barbecue places I’ve tried thus far.  It was very easy to eat the sandwich without sauce and it was excellent.  I’m not going to count this place in my final ratings since they’re not in the Kansas City area, but I thought I’d go ahead and write a review since I was there.  I’m very glad that we tried it.