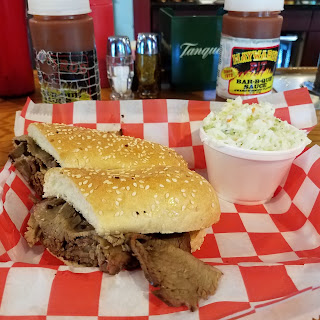 I decided to visit Hayward’s Pit BBQ in Lenexa today.  Hayward’s was founded in Overland Park, KS in 1972 and was located on College and Antioch for 45 years. It was sold to Eric Sweeney in 2014 and relocated in early 2016 to Lenexa, KS on Sante Fe Trail Drive near old downtown Lenexa. I remember visiting the location on College and Antioch many times but this is the first time I’ve been to their new location.

I arrived around 5:00 and sat at the bar.  This is a sit down restaurant where they take your order and serve you at your table.  I was greeted by a couple employees as I entered the restaurant and noticed that they make a point to say hello to everyone that walks through the door.  In fact, the manager greeted every customer that came in and knew almost everyone personally.  This place has a lot of regulars.  On Thursdays they have a slab of ribs special for $17.99 and a lot of people must come in every Thursday for the ribs because there was a constant flow of people coming in to order and/or pick up ribs.

I’ll have to try the ribs next time because today I was there to try the brisket.  I ordered a large brisket sandwich and coleslaw and I had my order within a few minutes.  As you can see in the photo above, the sandwich is served on a toasted sesame seed hoagie bun without sauce.  The meat was hot and tender, but bland.  I could have eaten it all without sauce, but the meat didn’t really have much of a taste to it.  I decided to eat half the sandwich without sauce and then split the other half in two pieces so I could try both of their sauces.  They have their own branded sauce and they have a regular and a spicy sauce.  The regular sauce is good.  It has just a little sweetness, but not overpowering by any means.  I really liked their spicy sauce.  It was not too spicy, but had enough kick to it that it lingered in my mouth a bit.  As I was eating a lady came in to order three bottles of sauce.  Apparently this restaurant is the only place they sell their sauce and she was picking up some sauce for her son, who lives in Dallas, who she was going to see this weekend.  (CORRECTION on 8/21/17:  You can order their sauce on their website at www.haywardsbarbq.com and also on Amazon.com.) There’s a fan of Hayward’s Barbecue Sauce.

My bill was $12.58 for a sandwich and side.  The coleslaw wasn’t anything special, but was a decent sized serving.

I’ll have to go back and try the ribs and burnt ends.  Their menu claims they have the best burnt ends in Kansas City, “period.”  I’m not sure if that title is self proclaimed or what since they don’t specify.  I wanted to try some, but it was $16 for an order so I passed this time.

If you go there for the brisket sandwich, try either of the sauces on it.  Both are very good.  Just wish the meat wasn’t so bland.

I’ve got 12 places down now.  Still have a ways to go, but making progress!