Tonight I tried C. Frogs in Prairie Village, Kansas.  C. Frogs has been around since 2006 as a barbecue and steak place.  This is an upscale restaurant along the lines of Jack Stack or something similar to that.  According to an article I found online, The concept for the restaurant was developed by Forbes Cross, who is also a partner in Michael Forbes Bar & Grill.  The meat is sourced locally from McGonigle’s and Scavuzzo’s markets.

This is a sit down restaurant where you are seated by a host or hostess as you enter the restaurant.   I was greeted, seated and served quickly upon entering.  My waitress brought me a glass of water as she greeted me which was a nice touch.  I noticed on the menu that their brisket sandwich is served with sausage, ham, cheddar cheese, tomato, ranch and Hillsdale Bank barbecue sauce on it.  I asked if they could serve it plain and my waitress said that was fine.  I arrived at the restaurant around 5:40 PM, ordered around 5:45 PM and received my food around 5:55 PM.

The sandwich was served on toasted and buttered bread.  It was also served with pieces of sausage and ham on the sandwich.  That was fine with me, as it was easy to remove.  The brisket had a great smoke flavor and was not fatty at all.  It had a good texture to it and was tender but was a bit chewy.  They serve the slices thick cut, which I really liked.  I also really liked the pieces of sausage.  Had a great flavor and were very tender.  I’m not much of a fan of ham, but I did eat the ham slices as well and they were good.

I tried the sauces with my fries.  My waitress asked if I would like to try the spicy sauce (since they only offer the original sauce on the table) and of course I said yes.  The original sauce was Hillsdale Bank barbecue sauce.  Although the Hillsdale Bank Barbecue closed a few years back, it’s nice to see their sauce is still around. 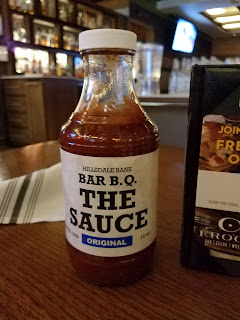 The original sauce had a strong vinegar and ketchup taste to it.  I thought it was okay.  The spicy sauce had quite a kick to it, so if you’re not a fan of spicy sauces, beware!  I had a lingering taste on my tongue for a while after trying that sauce.

They charge 10 dollars for a barbecue sandwich and the side of fries were three dollars extra.  That’s a little above average cost for a sandwich and fries.

Overall I liked this place and would go back to try some of the other items.  Their steaks are between $30-$40 unless you get the lunch special, which is a smaller cut.

This makes stop number 41 on my quest.  I still haven’t found anyone that has visited every barbecue restaurant in the area and I think I know why.  It’s a very difficult and somewhat grueling task!  I’ve been averaging about one stop a week and I doubt I could increase that average very much.  I’m pretty busy and finding the time to do it is getting harder as the remaining restaurants are getting further and further from my house.  That being said, I still have more than 30 places to visit and I’m looking forward to completing this quest!

You can follow along on my Facebook page at https://www.facebook.com/joesbbqblog/.  Thanks to everyone who has supported and encouraged me thus far!  Till next time….

One thought on “C. Frogs in Prairie Village, Kansas”