Tuesday evening I visited Chop’s BBQ in Smithville, Missouri.  Chop’s is another restaurant that started as a competition barbecue team that found success and eventually opened a restaurant.  It is owned by head pitmaster Dan Ulledahl.  Chop’s is located right across the street from the main square in downtown Smithville.  The restaurant had an interesting start, having a fire just 12 days after the initial opening during the fall of 2016.  Four months later they reopened and have been going strong ever since.  I found a nice write-up about Chop’s in Feast Magazine that you may want to check out.

I had never been to Smithville before my visit to Chop’s.  It’s a neat little town.  I arrived a little before 4:00.  This is a sit down restaurant that holds about 60 people at full capacity.  There was only one other customer at the time I arrived, so when I walked in I was greeted and invited to have a seat anywhere.  I was served right away by a very nice waitress and I ordered my typical brisket sandwich and fries.  The cost was around 11 dollars.

I received my food about five minutes after ordering.  The brisket is served as thick cut slices on a bun.  I didn’t realize that the thick cut brisket pieces is their signature.  Not many places slice the brisket this thick and I just happen to love it when brisket is served this way.  The meat was tender and flavorful with a nice bark, smoke ring and smoke flavor.  The sandwich was served without sauce and you definitely do not need sauce to eat it.  Sauce would ruin the flavor of this sandwich.  To be honest, when I drove up to the restaurant I thought “this is a small town joint so it’s probably just average” and I wasn’t expecting much.  Well my prejudice couldn’t have been more wrong.  I was completely blown away by how good it was.  I’m so glad I found this place!  It’s great! 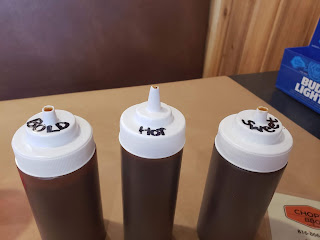 Chop’s offers three types of sauces at each table that you can try:  Bold, Hot and Sweet.  I tried them with my fries.  The bold sauce is a standard molasses based sauce that was really good and had a little bit of spice to it.  The hot sauce tasted like it used the bold sauce as a base with more spice added to it.  It wasn’t really too spicy, but it was still pretty good.  The sweet sauce was obviously sweeter than the other two, but it wasn’t too sweet at all, which I liked.  All of the sauces were really good.  The fries were served with seasoning on them and the seasoning had a little bit of kick to it.

As I was finishing my meal I noticed all of the framed ribbons and awards from various barbecue competitions hanging on the brick walls.  Dan has won his fair share of barbecue competitions!  And it appears that he serves it that way in his restaurant as well.  What a great find.  If you’re in the area, or even if you’re not in the area, take the trip to Smithville to check it out! 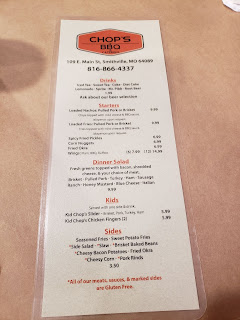 This is visit number 67 on my quest.  I’m a little shocked to think I’ve made it this far!  Only three more to go unless any of you want to open a new barbecue restaurant in the next week or two.  I’m almost done!

One thought on “Chops BBQ in Smithville, Missouri”