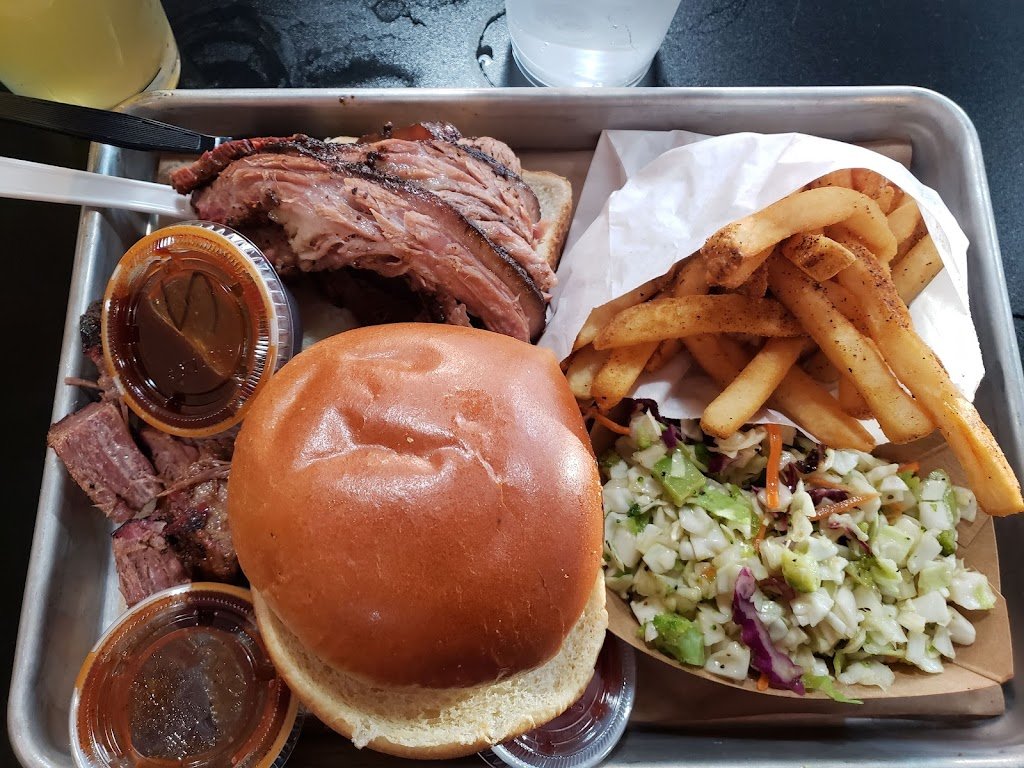 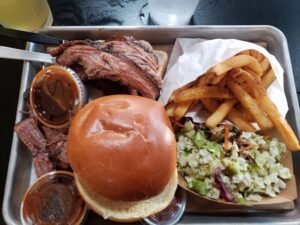 Friday I visited Jousting Pigs BBQ in downtown Liberty, Missouri with a buddy of mine.  Jousting Pigs has partnered with 3HALVES Brewing Company to create a craft brew and barbecue experience.  It’s a setup that reminds me of  the partnership of Harp Barbecue and Crane Brewing in Raytown.
Jousting Pigs is a partnership of two competition barbecue guys.  Their awards and ribbons are plastered all over the walls in the place.  From their website…
“Jousting Pigs BBQ is a husband and wife competition barbeque team from Liberty, MO.  John and Brandi Atwell have been competing for 5 years winning numerous awards including multiple perfect scores in chicken and brisket.  When the opportunity to open a restaurant in Liberty presented itself John jumped at the opportunity to join the amazing Historic Downtown community.  John is excited to bring his traditional barbeque style to Liberty, MO.
John is being joined in this venture by Rod Blackburn of RAILYARD BBQ competition barbeque team. Rod was one of the first people John met in the competition barbeque world and they quickly became friends. John and Rod have cooked together many times in competition and we are happy to have his experience and expertise. Rod has been competing since 2013 and has multiple grand and reserve grand championships plus numerous category wins and perfect scores.”
One of my blog followers told me about this place sometime last year after they opened.  I think they’ve been in business about a year or so, but was unable to find exactly when they opened up.  Maybe someone can help me find out for sure.
We arrived around 5:30 on Friday.  There was parking available on the street(s) outside the restaurant.  There are three separate seating areas, one with a bar and one an outside large patio seating area.  The place was already bustling at this point.  Lots of people, pandemic be damned.  You are required to wear a mask anytime you are not seated at your table and all of the employees were wearing masks.  The tables were spaced to ensure social distancing and it was overall a very safe environment.
My buddy and I are both craft beer fans, so we decided to have a beer or two before ordering food.  You need to order beer from the bar and then take it to your table.  Same with the barbecue.  You order at the counter and then they give you a tabletop number and they bring your food to you when it’s ready.
I need to mention that the beer was really good.  These craft brew places are all the rage now and they are hit and miss.  This one was a hit.  I tried the light beer, the wheat beer and the IPA.  The IPA was great, probably the best IPA I’ve had in a while.
As we were trying the beers, the line to order barbecue was getting pretty long, all the way to and out the front door.  There were 15-20 people in line at any given time.  Pretty busy for an evening during this pandemic.  It was good to see they’re surviving this quite well.
After a beer or two we got in line to get our food and as I was about to order a young lady from the kitchen came out with some blue tape and was placing it over certain menu items that they had run out of.  So, beware, this is a “when we run out, we’re out” barbecue place!  Luckily what I wanted to order was still available.  Their brisket sandwich comes chopped, which I’m not a fan of, so I ordered a two meat plate of brisket slices and burnt ends and ordered a bun on the side.  Problem solved!  I ordered fries and coleslaw as my side dishes.  The total was about 25 bucks, but it is well worth it because they give you a lot of food.
We were only back at our table a couple minutes before our food arrived.  Very fast service.
I dug right into my food.  The brisket slices had a great smoke flavor and rub on them and were very tender.  They were trimmed, but they left some fat on it.  I know some people like the fat and some like it completely trimmed off.  This was kind of an in between cut.  I really liked it.
The burnt ends were very good as well.  Not fatty at all.  If you like your burnt ends VERY BURNT, they may not have been done enough for you, but they were very flavorful and tender and completely trimmed of fat.  No complaints by me!
My buddy ordered the smoked turkey and he raved about it and finally let me try it.  It was a pretty thick cut of turkey and it was very smokey flavored and tender.  Great smoked turkey!  I get the feeling that all the food here is very good.
The coleslaw is vinegar based and I loved it.  The fries were good as well.  Thick cut with a nice seasoning on them.  They offer two sauces, a regular sauce and a spicy sauce.  I tried the sauce with my fries because you definitely don’t need the sauce to enjoy the meat.  The regular sauce was good and not very sweet.  The spicy sauce was not overpowering, but the spice lingered on my tongue for about 15 seconds, which was great!  My buddy liked the sauces so much that he ate the sauce with his fork.  Unfortunately I didn’t get a picture or video of this.  You’ll just have to take my word for it!
It was really great to try a new barbecue place that has opened since I completed my initial barbecue quest.  I’ve gotta say, the brisket here would definitely make my top 10 and probably even the top five in town.  I’m very glad I found this place and hope a lot of you get to try it.  Let me know what you think!  Till next time…..