Tonight I visited Burnt End BBQ in Overland Park, KS.  Burnt End BBQ got its start in 2011 and has been at its current location on the corner of 119th and Metcalf since 2014.  I have been there once before but went tonight to try the brisket as part of my barbecue quest.

I arrived around 5:15 Thursday evening.  They weren’t too busy at this time, as there were only three people eating at tables as I walked in and I’d estimate it seats about 50 people.  This is is a restaurant where you order at the counter and you seat yourself and they bring your food out to you.  I ordered a large brisket sandwich and fries and my bill was around eleven dollars.  They have a self serve drink station and by the time I got my drink and sat down they were bringing my food to me.

The brisket is thick cut and served on a toasted hoagie bun without sauce.  The brisket had a great smoky flavor and a nice smoke ring.  The meat was a bit dry and chewy and was too dry to eat on that bun with no sauce on it so I only ate a few bites without sauce before putting some of their original sauce on it to finish the sandwich.

They have three sauces at each table that you can try.  Their “Original” sauce is sweet with a small kick to it and has a brown sugar flavor.  Their “Thick and Bold” sauce had a strong molasses and smoke flavor to it.  It’s my favorite of the three and a really good sauce with no kick to it at all.  The third of their sauces is the “Spicy Southwest,” which has a bigger kick to it than their original sauce and is made with green chili peppers.  The french fries were standard fries that you would get at any fast food joint and were nothing special. 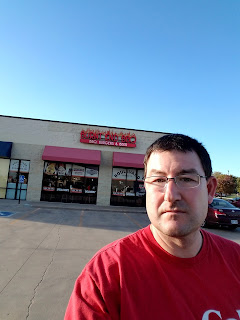 This was visit number 25 on my barbecue quest.  Although one of my ground rules was to not include any chain restaurants other than local chains, I decided to include this one. It is part of a larger restaurant group called PB&J, but this is the only barbecue place in the chain.  They own other restaurants in the area such as YaYa’s and Red Robin.

Thank you for reading and following along.  Please feel free to share any of my posts on social media and “like” my Facebook page.  Till next time…