Today I visited Smokin’ Guns BBQ in Kansas City, Missouri.  Some information about Smokin’ Guns, according to their website..

“Phil and Linda Hopkins have been competing in barbecue contests as Smokin’ Guns BBQ since 1997. They have competed in nearly 400 contests across 15 states. They also are members of the Kansas City Barbeque Society (KCBS) and are certified barbecue judges.

In 1999, Smokin’ Guns took the Grand Champion title at the Jack Daniel’s World Championship Invitational Barbecue contest. They competed against 41 other championship teams and took 1st in brisket, 2nd in pork, and 5th in ribs. Linda also took 4th place in the dessert category.
In 2000, Phil and Linda launched a line of BBQ rubs. Their Smokin’ Guns BBQ rubs are available across the country in specialty stores and through this Web site, www.smokingunsbbq.com.

In 2003, after leaving a 14-year career as a supervisor in a metal fabrication plant, Phil opened Smokin’ Guns BBQ & Catering, a 50-seat restaurant in North Kansas City, Missouri, bringing to the public his world championship barbecue. He feeds hundreds of people a day and caters to local businesses. In 2006, Linda left the corporate world after 25 years as a technical writer and joined Phil full time at the restaurant. Phil & Linda continue to hit the competition circuit on weekends, which frequently results in more awards.”

My son is home from college this weekend and I decided to do a barbecue tour stop with him.  We arrived at the restaurant around 4:00 on Saturday.  This is a sit down restaurant where you are seated by a server and waited on by a waiter or waitress.  They have a separate bar area from the restaurant area.  The bar area seats about 25-30 people and the restaurant seats around 75 I would guess.  They also have a rooftop patio that I did not see.  We were greeted and seated immediately upon walking in and our waitress provided great service.  There were only about 10-15 other people in the restaurant at this time of day.  According to the menu, you can order their sandwiches on bread or on a bun with or without sides.  I ordered my standard brisket sandwich with two side dishes.  Baked beans and sweet potato fries.

We received our food in about five minutes.  The sandwich is served without sauce on it.  The brisket was thinly sliced pieces and was hot but very tough and a bit fatty.  It also tasted very bland.  I removed a few pieces of brisket from the sandwich so I could try the sauces and rub on it.  I finished about half the sandwich before breaking down and finishing the rest with some sauce on it.

They have two sauces, their regular and spicy sauce, at each table to try along with their rub.  I thought the regular sauce was excellent.  Very smooth with no bite to it and not ketchup tasting at all.  The spicy sauce was good as well.  It had a slight, but not too powerful, kick to it.  The rub had a strong pepper taste to it and also included paprika and chili powder, among other ingredients.  I thought it was pretty good.  They sell their sauces and rubs right there in the restaurant and I bought a bottle of the regular sauce to take home with me.  I have done that at very few places thus far on my journey.

As for the sides, the baked beans were good and hot with some small chunks of meat in it.  The sweet potato fries were room temperature by the time I tried them, but had a good flavor to them.  They were served waffle style.  The bill for a large brisket sandwich and two sides was around 13 dollars. 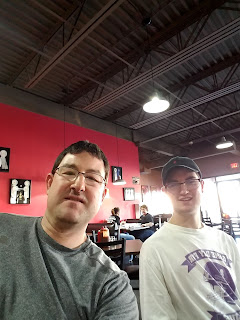 This makes visit number 39 on my quest.  I was hoping this place would be better because I’ve heard good things and they aren’t shy about bragging about their awards on their website.  I was a big fan of the sauces and have heard the rub is a great seller as well.  I just wasn’t a fan of the brisket.

Don’t forget to follow along on my Facebook page,  I get a few more followers each time I mention it, so I’m going to keep mentioning it!  Thanks again for your support and for reading.  Till next time….