Today I visited Hawg Jaw Que and Brew in North Kansas City, Missouri.  It is located just north of the river on 9 highway.  Hawg Jaw started in 2011 in Riverside and moved to this location just over a year ago.  Family-owned Silvio’s Foods in Riverside purchased the business in late 2014 and brothers Sam and Nick Silvio operate the barbecue.

Sometimes this quest gets somewhat tedious and that makes it hard to get motivated.  When you drive two hours round trip to try a barbecue restaurant and it’s just “okay,” it’s hard to get pumped up to check the next one off the list. It’s somewhat of a mind game, just like going to the gym is for me. The thing that keeps me going is that I occasionally find great places like Hawg Jaw that I would have never thought of visiting if it weren’t for my quest.  I honestly had never heard of this place before and I didn’t know what to expect.  I was blown away by how good it was.

I arrived around noon on Saturday.  This is a restaurant where you order at the counter and you have a seat and they call your name when it is ready.  They have a self serve drink station, which is nice.  I took my daughter with me this time and she ordered the ribs and I ordered their large brisket sandwich and fries.  We were only seated a few minutes before they called my name that our order was ready.

The brisket is served in thinly cut slices on a standard hamburger bun without sauce on it.  As I took my first bite my daughter asked “aren’t you going to put sauce on it?”  My reply was “don’t you read my blog? I love the taste of meat, not sauce.  I’m here to judge the meat!”  Amateur! Ha, ha.

The brisket was very tender and juicy with a nice smoke ring and great smoke flavor.  The sandwich definitely did not need sauce and went down great without it.  The fat was trimmed nicely.  Some places leave the fat on to help make the meat juicy, but this meat was juicy without the fat.  It was a great sandwich.

My daughter couldn’t finish the ribs so she let me try them.  They were the best ribs I’ve had in a long time.  They were very tender, but still stuck to the bone and very juicy with a great smoke flavor.  I haven’t had the ribs at every place in town yet, but these are the best ribs I can remember eating at a restaurant in Kansas City. 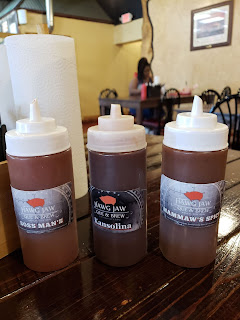 Hawg Jaw offers three types of sauces at every table along with a smoked ketchup.  There is a “Boss Man’s” sauce, a “Kansolina” sauce and a “Mammaw’s” sauce.  I tried each of them with my fries.  The “Boss Man’s” is their sweet sauce.  I’d characterize it as VERY sweet.  Had a stong jelly flavor to it.  The “Kansolina” was less sweet, but still had the jelly flavor.  It just wasn’t as strong.  The “Mammaw’s” is their spicy sauce and had a bit of a kick to it, but was not overpowering at all.  It was my favorite of the three. 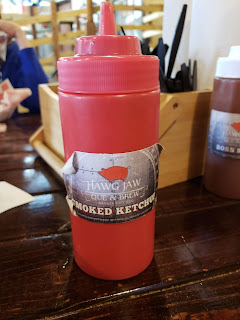 The smoked ketchup was very interesting.  It just tasted like ketchup that’s been on the smoker for a couple hours.  It was actually really good!

I’m glad I found this place.  It’s close enough to downtown that if you work down there you can easily drive across the river for lunch and make it back to work in plenty of time.  I’m looking forward to my next visit.  Another good thing to know is that they sell their sauces and rubs right there in the restaurant.  I bought some brisket rub for $3.50.  I thought that was a great deal.

This is visit number 48!  Almost to 50!  Don’t forget to follow along on Facebook.  I’m enjoying everyone’s comments and opinions.  Till next time…