Thursday night I visited Jazzy B’s Diner in Lee’s Summit, Missouri.  Jazzy B’s is owned by Brandon Simpson, who started his business as a food truck in 2010.  It was so successful that he eventually opened the restaurant in 2016.  The food truck is still in operation as well.  Brandon made a great decision getting into this business because this guy knows his barbecue!

I went with a buddy of mine from out of town who loves barbecue and had never tried this place.  We arrived around 6:00.  This is a place where you order at the counter and they serve your food right there at the counter and you can sit wherever you find a table.  I saw Brandon when we ordered and introduced myself and explained my barbecue quest.  He asked what my favorites are so far and he seemed kind of surprised as he had only heard of one of them.  Brandon’s a jovial and outgoing guy and a pleasure to talk to.

I ordered my standard brisket sandwich and fries.  They asked which sauce I wanted on it, regular or spicy.  I asked if I could try both on the side and they said that was no problem.  The bill was about $12.50.  We received our food about five minutes after ordering and had a seat.  The brisket is cut into chunks and served on a bun.  It’s kind of like burnt ends would be served, but not quite as thick as burnt ends are cut.  It was a unique way to serve a brisket sandwich and it was the first restaurant that I’ve been to that served it this way.  The meat was tender and flavorful and had a nice crunchy bark and nice smoke ring.  It was a little dry, but I still didn’t need any sauce on it to devour the sandwich in almost record time.  Overall a great sandwich.

I tried the sauces with my fries.  The fries had a nice sprinkling of seasoning on them  The regular sauce had a molasses flavor to it with a hint of grape jelly.  A good, mild sauce.  The spicy sauce is made with habanero, ghost peppers and some sort of blueberry spice.  It sounds really spicy, but it is really fairly mild and not overpowering.  However, it has enough spice to get your mouth tingling and keep it that way as you keep eating it.

Shortly after we got there I asked Brandon how the wings are.  The expression on his face and his reaction was enough to tell me I had to try them.  So I ordered some for dessert!  I have to say these were the best smoked wings I have ever had.  They are advertised as “Smoke Fried Chicken Wings.”  I asked Brandon how he prepares them and he smokes them and then deep fries them to get a crunchy skin on them.  Like a lot of us, he didn’t like the rubbery skin you get when trying to smoke wings and this is a great solution to that problem! These are whole chicken wings like what you would get at The Peanut and you can order them regular or with the spicy sauce on them.  I ordered them spicy and by the time I had five of them I was so stuffed I couldn’t eat anymore.

I’m so glad I found this place.  Brandon knows his barbecue!  It’s a bit of a drive for me, but it was well worth the drive.  If you’re someone who thinks Gates, Arthur Bryant’s, Joe’s KC or Jack Stack has the best barbecue in town, it might be worth a trip to Jazzy B’s to see if your opinion might change. 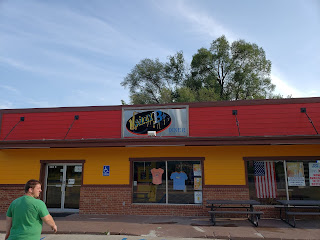 This completes stop number 53!  Still plugging away!  22 more to go!  Don’t forget to follow along on Facebook!  Till next time…