Today I visited Oden’s Family BBQ in Belton, Missouri.  Oden’s has been owned and operated by Jim & Karen Oden since 1982.  Oden’s recently reopened after some embers from their smoke pit got inside the restaurant walls and started a fire.  There’s not a lot of information about Oden’s online and their website just lists their hours and allows you to place an online order for pickup.

I arrived around 1:30 on Sunday.  This is a sit down restaurant where a hostess seats you at a table as you walk in and you are waited on.  The restaurant has a rustic feel and decor to it.  Kind of reminded me of a Cracker Barrel.  I was seated instantly and waited on instantly.  They have a couple of different options for barbecue sandwiches.  You can order it on a round bun or hoagie bun.  I ordered the brisket on a round bun that was called “Jimbo on the Round” on the menu.  It comes with fries and costs nine dollars.

I received my order about 20 minutes after ordering.  The sandwich was served with thin cut slices of brisket on a toasted bun with no sauce.  The meat had an okay flavor but was tough and dry.  It was way overcooked in my opinion.  I ended up putting sauce on the sandwich after a few bites and finishing it that way.

Just an observation I had while dining, and this is a big pet peeve of mine, is that when the waitresses refill your water they take your glass to the back to refill it instead of bringing you a glass of water to replace your glass or bringing a pitcher of water around to refill your glass.  One of my waitresses disappeared with my glass for about five minutes and when she finally came back she apologized for taking so long to refill it.  It’s just annoying to not have a drink in front of you to wash down your barbecue.  Maybe I’m being too picky.  Like I said, it’s just a pet peeve of mine.

They had some interesting things on the walls in this place, like this rotary phone: 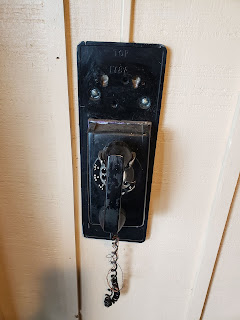 I hadn’t seen one in a while, so I had to snap a picture of it!

This restaurant has been in business for a while, but it’s obvious to me that brisket isn’t their specialty.  They do serve items other than barbecue, so I’d be interested to hear what others have to say about their food.  Seems like they have mostly positive reviews online.

This is number 54 on the quest.  20 left to go!  You can also follow allong on Facebook at https://www.facebook.com/joesbbqblog/.  Till  next time….